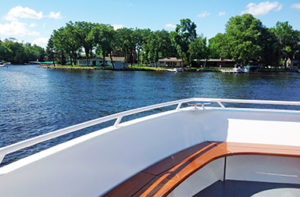 EAST GULL LAKE – Lit up for the Fourth of July this week, Destiny Cruises’ North Star yacht is giving residents and visitors alike another way to experience summer in the lakes area.

Liz Diedrich, owner of Twin Cities-based research and marketing firm Diedrich RPM, first looked into the idea of a luxury motor yacht while putting together research for a client.

After all, the boats are a familiar sight on Lake Minnetonka. But that isn’t where Diedrich wanted to be. Looking at population numbers of residents both year-round, seasonal and tourists, Diedrich said Gull Lake came up as a great opportunity.”So I got interested myself,” Diedrich said. She put together a business plan and with partners Jerry Johnson and Reid Porter.

Their creation, Destiny Cruises, brought the North Star yacht to its port of call at Ernie’s on Gull dock in East Gull Lake.

Getting the $1.8 million vessel to Gull Lake from its manufacturer at SkipperLiner in La Crosse, Wis., was challenged by a long winter and longer lasting road restrictions. The 65-foot-long yacht weighs 73 tons.

Getting the yacht to Gull Lake proved to be a bigger task than they imagined. Even as they started the open water season later than they expected, the partners expressed confidence about a long-term future on Gull Lake. They were hands-on owners at recent inaugural cruises. Diedrich said they sold 30 percent of their charters before the yacht’s first cruise in June…