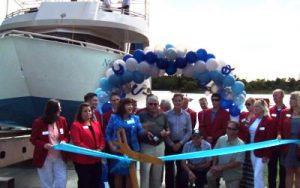 All aboard. A new passenger yacht has hit Gull Lake in the Brainerd Lakes Area. Destiny Cruises launched their North Star ship in Nisswa Tuesday. They’ll offer four cruises a day, a breakfast, lunch and dinner cruise as well as a twilight cruise around Gull Lake.

Destiny Cruises co-president, Liz Diedrich, says, “We wanted to be an amenities that is not currently here and add as an attraction to the rest of the good things and resorts that are up here.”

Johnson says, “Think of Lake Minnetonka there’s 19 of these vessels there’s only 1 here. And we think it’s going to be a very special event and a very special time for people here.”
Reid Porter, co-owner of Destiny Cruises, says, “We think we have the right combination of partners and frankly a much nicer boat than that to be a great success on the lake.”…